Ontario’s official motto is “Ut incepit Fidelis sic permanet” (Loyal she began, loyal she remains). Ontario continues to be loyal to Christianity and the British Crown as indicated by Ontario’s official symbols.

On Ontario’s coat of arms, a black bear draws the eye to the cross at the top of the shield. 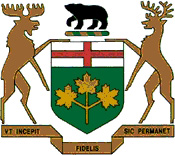 The Ontario Provincial Police (O.P.P.) crest contains a cross and a crown with a cross.

Finally, less obvious but definitely evident, Ontario license plates have a crown, representing the Crown of Canada. The crown is topped with a cross.

Despite the words of the song,  A Place to Stand, a Place to Grow (Ontari-ari-ari-o!)  the unofficial anthem of Ontario written for Expo 67, officially, Ontario remains loyal to Christianity and to the Crown of England.

22 thoughts on “Ontario: Christianity and Crown”