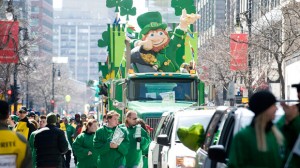 According to Margery Eagan, columnist for the Boston Herald, “It’s time to get rid of ” the  South Boston St. Patrick’s Parade:

This supposed celebration of Irish pride and culture has instead become a paean to bigotry. It’s an embarrassment to Boston. It should embarrass Irish-Americans. . . . Where do parade organizers even get the idea that celebrating Irish pride and culture means keeping gays virtually in the closet? . . . Where do parade organizers get the idea that celebrating the military means keeping gays in the closet? . . . And where do these same Southie boyos get the idea that Catholics are anti-gay? . . . It’s time to end this embarrassing charade of a parade. It’s time to really move on.

No kidding, it is time to move on from any discussion of whether gays should or should not be allowed to fully participate in any public event. We, especially Canadians, should not even be having this discussion. In Canada, members of LGBTQ communities are not second class citizens; they are fully functioning members of Canadian society.

Unfortunately, John Oakley thinks the controversy around the South Boston, St. Patrick’s Parade is a topic for debate on The John Oakley Show on Talk Radio AM640. Yesterday, Oakley gave air time to Charles McVety.

According to Wikipedia, McVety is a Canadian evangelical Christian leader. and the president of Canada Christian College. According to Rob Breakenridge, in an article in the National Post, McVety is a “free speech hypocrite.” Forget the adjectives; McVety is an all-round bigot, who spews ad hominem attacks on his opponents. Yesterday, when ranting and raving against gay rights didn’t work, McVety decided to attack Justin Trottier, the spokesperson for the Canadian Secular Alliance.  Trottier’s insistence on gay rights and human rights caused McVety to compare Trottier to Fred Phelps, an American pastor who heads the Westboro Baptist Church.

Phelps’s followers frequently picket various events, such as military funerals, gay pride gatherings, high-profile political gatherings, university commencement ceremonies . . . mainstream Christian gatherings and concerts with which he had no affiliation, arguing it is their sacred duty to warn others of God’s anger.

It is McVety who is like Fred Phelps.  It is McVety who encourages people like the female Catholic bigot, who called the show to say that although she has gay friends, they should not be allowed to participate in a parade honouring a Catholic saint.

Let’s cancel all St. Patrick’s Day parades! Why are Catholics and Christians  celebrating during Lent anyway?  Lent is supposed to be a “time of prayer, penance, repentance of sins, almsgiving, atonement and self-denial”; it is not a time for carnival. The very best act of self-denial for bigoted Catholics and Christians is denying themselves the pleasure of self-righteous bigotry for forty days. Who knows, they may even enjoy not being bigots.