I came across this meme on Twitter today. It is a nice quote that seems to support a Humanist outlook, but unfortunately it isn’t accurate & I’ve noted the errors in notes on the meme itself. 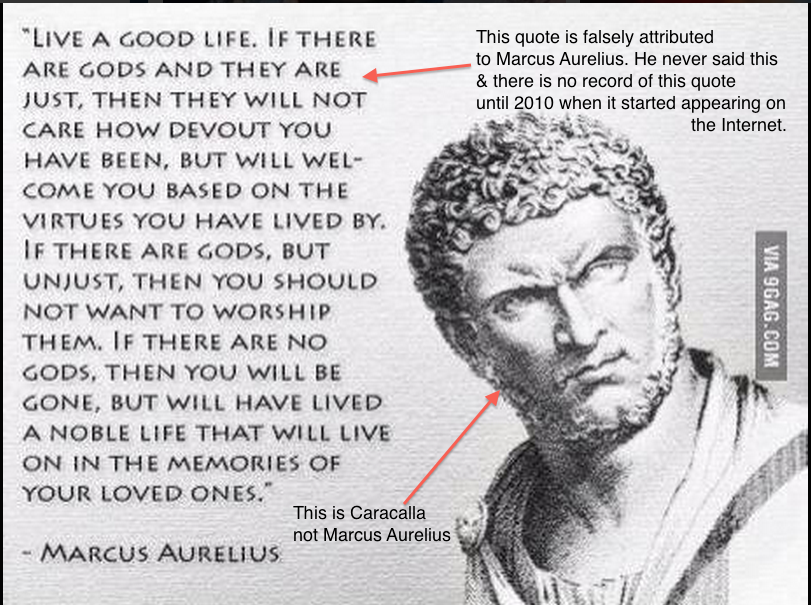 This isn’t Marcus Aurelius, it’s Caracalla. Marcus Aurelius has more of a full beard & lots of curls. Caracalla sports more of a military look. Also, unlike Marcus Aurelius, who reigned during the Roman Empire’s most peaceful time, Caracalla reigned when things were starting to go badly for Rome. Marcus Aurelius spent time travelling around the empire, studying everything Greek & philosophizing about all kinds of things, including how to live one’s life. He expanded the empire and died a natural death. Caracalla, although he opened up Roman citizenship to free men across the Empire, was disliked for his wide reaching massacres, killed his own brother and was ultimately assassinated.

I didn’t think this quote sounded like something Marcus Aurelius would say or at least it sounded too good to be true, so before I started pulling out the heavy duty texts, I did a quick Google search and low and behold, Wikiquote came through. Of this quote, Wikiquote states:

No printed sources exist for this prior to 2010, and this seems to have been an attribution which arose on the internet, as indicated by web searches and rationales provided at “Marcus Aurelius and source checking” at Three Shouts on a Hilltop (14 June 2011)

This quote may be a paraphrase of “Since it is possible that thou mayest depart from life this very moment, regulate every act and thought accordingly. But to go away from among men, if there are gods, is not a thing to be afraid of, for the gods will not involve thee in evil; but if indeed they do not exist, or if they have no concern about human affairs, what is it to me to live in a universe devoid of gods or devoid of Providence? But Gods there are, undoubtedly, and they regard human affairs; and have put it wholly in our power, that we should not fall into what is truly evil. ” from Meditations, Book II, but the quote in question has a quite different meaning.

So there you have it. Sometimes you can refute incorrect memes but sometimes the memes, even the ones that look right, are in fact incorrect. Beware false memes!