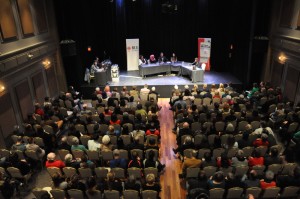 On Tuesday, January 28, Anna Maria Tremonti from the CBC’s The Current moderated a panel discussion and public forum on “Quebec’s controversial proposed Secular Charter, which has divided Quebeckers and sparked debate across Canada.”

wanted to hear what Quebeckers think of the proposed secular charter and whether it will be good or bad for the province. [CBC] assembled a panel at the Crowley Arts Centre to make the case for and against, and then we opened it up to the audience.

Caution: The emotive word racist is used with little regard for accuracy.

14 thoughts on “Talking about the Proposed Secular Charter”