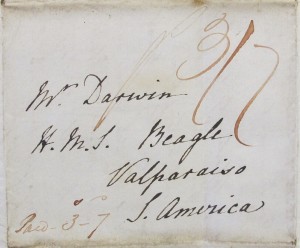 You can read the whole letter at the New Republic, but here are a few excerpts:

let me introduce myself. I am one of thousands—maybe tens of thousands—of professional biologists who work full time on your scientific legacy. You’ll be happy to know that Britain remains a powerhouse in what we nowadays call evolutionary biology, and your ideas now have wide currency across the entire planet. I work in Chicago, in the United States of America. But even the French have finally reluctantly relinquished their embrace of Jean-Baptiste Lamarck, whose misguided evolutionary ideas you did so much to discredit.

I wish I could end this letter by telling you that your theory of evolution has achieved universal acceptance. As you well knew, evolution has proved a bitter pill for religious people to swallow. For example, a large proportion of the American public, despite access to education, clings to a belief in the literal truth of Genesis. You will find this hard to believe, but more Americans believe in the existence of heavenly angels than accept the fact of evolution. Unfortunately, I must often put aside my research to fight the attempts of these “creationists” to have their Biblical views taught in the public schools. Humans have evolved extraordinary intellectual abilities, but sadly these are not always given a free rein by their owners. But this probably won’t surprise you—remember the Bishop of Oxford and his attempt to put your friend Thomas H. Huxley in his place?

Your most humble servant,

One thought on “Letter to Charles Darwin”