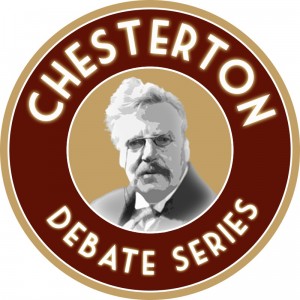 One of the organizers of the first debate in the Chesterton Debate Series: “Is There a God?” draws attention to Peter Stockland’s Catholic Register article on the debate by quoting from Stockland’s article and asking,

“Instead of drinking bottled water, [Trottier and Fr. Cleevely] should have had a welcoming table supplied with substantial beer.” Agree?

If that were all Stockland was asking in his article, “G.K. and the God debate,” it would be easy to agree. However, Stockland’s uses his article to praise Chesterton and the Catholic debater, Philip Cleevely and to criticize Justin Trottier.

Stockland’s report of the debate is predictable and wrong. Stockland’s report is predictable because Peter Stockland is the Director of the Cardus Centre for Cultural Renewal, an organization that argues “for the importance of religion to culture and culture to religion. His report is wrong because he claims the debate “attracted 500 souls on a frigid February Friday night.”  Give me a break: Souls? The existence of a soul is as difficult to prove as the existence of God and the debate attracted a lot of people not just Catholics and Christians and many of them were not in attendance for the good of their non-existent soul, but were there to hear Philip Cleevely prove the existence of God. Despite the fact that Stockland describes Cleevely as an “Oxbridge trained philosopher-theologian,” Cleevely did not convincingly argue for the existence of a God.

God was not abundant; in fact, God wasn’t even in attendance, so He couldn’t have turned the bottled water into beer. Furthermore, of course Chesterton was not in attendance; he is dead and the dead don’t rise from their graves, much to Stockland’s disappointment:

Chesterton, of course, loved beer. It was among the things that made him so abundant. He loved beer as he loved God: in the cause of good company and glad hearts. Let us pray that particular goodness of G.K.’s spirit fills the debating hall the next time round.

Yes, Chesterton ” loved beer” and that’s one reason why he was so “abundant.”

It is a waste of time to dwell on Stockland’s lament, “there is no room for Chesterton” at the debate, and it’s a bigger waste of time to dwell on Stockland’s blatant criticism of “inquiring skeptic Justin Trottier” or on his praise for Philip Cleevely.  On the other hand, Stockland is correct. there should have been “a welcoming table supplied with substantial beer.”  A little bit of beer would have helped the bitter medicine (Cleevely’s convoluted and impenetrable argument for the existence of God) go down.

Stockland ends his article by saying,

Let us pray that particular goodness of G.K.’s spirit fills the debating hall the next time round.

Let’s not; let’s ask the organizers to provide beer, skepticism and two debaters with inquiring minds instead of just one.