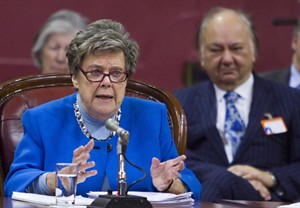 At the same time, she severely criticized the Liberal Party of Philippe Couillard for breaking with its past as a champion of secularism and women’s rights, she said.

Ms. L’Heureux-Dubé considered that Bill 60, which defines a charter of secularism for the Quebec government, should pass court tests without problems, if necessary. Having said that, she sees no problem if the government chooses to use the Notwithstanding clause of the Canadian Charter of Rights to avoid possible legal challenges. “Not necessarily, but if necessary,” she said.

The most controversial aspect of Bill 60, the ban on state employees wearing conspicuous religious symbols, is in no way discriminatory, says the lawyer who served on the highest court in the country from 1987 to 2002. The wearing of religious symbols is not a fundamental right, she argued. And no right is absolute.

During a press conference after presentation of herbriefat parliamentary hearings on the charter, Ms. L’Heureux-Dubé expressed surprise and disappointment at the position of the Liberal Party of Quebec, which, she said, contradicts the tradition of that party, which at all times had been favorable to state secularism and the promotion of equal rights for women.

“Being liberal myself, I would have preferred something more positive and which respected that great tradition of liberal support for secularism. The Liberals fought against the Church on many occasions, she reported, particularly when adopting the right to vote for women in 1940 in defiance of the clergy.

“I wonder how one can deny that great tradition of secularism,” she asked.

In the same spirit, it is also unfortunate that the party led by Philippe Couillard did not show more openness to proposals from Fatima Houda-Pepin who was forced to leave the caucus because Couillard refused to consider any form of ban on religious symbols.

“I have great admiration for her, for the courage she has shown,” said the former judge, convinced that Ms. Houda-Pepin “knows what she’s talking about” when she addresses issues of secularism.

The lawyer, who defines herself as an eternal “dissident,” disagrees with those who are quick to claim that the charter would have a negative effect on the rights of women, particularly Muslim women wearing the veil and likely to lose their jobs in the public service.

This argument does not hold water, she says, because “the charter of secularism does not cause discrimination against women. One might ask, in the current situation, which discriminates more? Religions? Or the secularism charter?”

The former judge appeared before the hearings representingLawyers for secularism and religious neutrality of the state, which has 12 signatories, including constitutionalist Henri Brun and former batonnière of the Montreal Bar Association, Julie Latour, who accompanied him.

“We must not miss the opportunity to set standards for the future,” insisted Brun, convinced that Quebec does not have to fear appeals court challenges. The constitutionalist from Université Laval was categorical: “We believe that this bill, in its entirety, is constitutional and valid.”