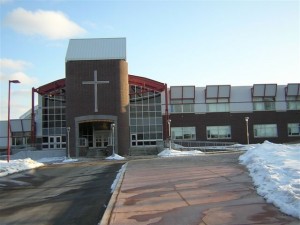 The media are partially responsible for the excessive respect religion receives in Ontario.  Most articles, whether they are for or against accommodating religion, use pictures with their articles that imply that religion and religious symbols (especially Christian) are familiar and acceptable in Ontario.

For example, Anthony Furey’s very welcome article, “No need to ‘respect’ religions,” is accompanied by a picture of a man’s hands folded on what looks like a Bible. Despite the very annoying picture, a sop to soften the blow of the message, it is a universal truth that religion does not deserve respect or special accommodation.  Furthermore, it doesn’t deserve Government funding, and it is a misuse of public funds to support religious instruction in public schools.  As the Canadian Secular Alliance points out,

Although Ontario, Alberta and Saskatchewan still have archaic constitutional obligations to fund Catholic schools (“denominational privileges”) dating from 1867, the financing of religious schools can (and should) be eliminated via simple bilateral constitutional amendments similar to the one adopted by Quebec [and Newfoundland].

Udo Schuklenk explains “Why special funding for Catholic schools is wrong” and focuses on Ontario, where every taxpayer funds a separate education system for Catholics.

Let me amend that last line. The reasons for this are hysterical, and they are well known. There is no Ontario party willing to stand up to the Catholics, and the Catholics, reveling in their privilege, know this. They work hard to sabotage any effort to change the publicly Ontario education system. They think they have a Constitutional right to force taxpayers to fund their homophobic, misogynist,  superstitious education, an education that starts with a prayer and ends no doubt with the majority of students saying Deo gratias: thank God that’s over

One of the reasons the non-Catholic and non-religious Ontario taxpayers don’t take to the streets or get together en mass to write their MPPs is misinformation.  Not enough people know how the public-but-separate Catholic system is funded. Most people think

When [they] fill out [their] property tax form, indicating which school system [they’d] like [their] taxes to benefit — English or French public or English or French Catholic — . . .  assume that’s where most funding for [their] board of choice comes from.

There is no question publicly funding Catholic schools is unjust, wasteful, and unnecessary; it remains because of political expediency.  As

There is simply no longer a case to fully fund a sectarian education system whose teaching are at odds with the fundamental values of Ontario society.

The solution is to merge the four systems: English public, English Catholic, French public, French Catholic, which will save at least 1.6 million a year. However, the Ontario Catholic School Trustees’ Association, ignoring the money a merger would save, used more public money to create a promotional video to highlight the superiority of a Catholic education. The video was

meant to “celebrate the distinctive attributes of Ontario’s Catholic schools in support of the students and families in our school.”

The video implied that the public system is inferior to the public system, so even though  the promotional video was taken down “after it drew criticism from its secular counterparts,” the damage is done.

Therefore it is important to stress Catholic education is not superior; “Catholic students [are] not more equal,” and futhermore,

The study of religion, the study of all our kaleidoscopic religions, can most assuredly enrich your life. On the other hand, being told that your particular creed is the only sacred truth and asking the public to fund your beliefs through separate schools … not so much.

What can you do to convince the Ontario government to abolish public funding of Ontario Catholic schools?

One thought on “Ontario’s Privileged Catholics”